I’m really excited to share this post because I love to see practical tips for applying new things in everyday life and I figure others do, too! My last post was about the glasses we wear throughout life, how they show us what to see, and how we can change them if we want to (if you missed it, you can check that post out here).

I talked (well, wrote) in the last post about how the first step toward freedom is realizing you are wearing glasses (ie, have adopted a specific narrative). The second, if you don’t like the glasses you’ve always worn, is choosing to try on a new pair – easier said than done, but I think this short story might give you a good starting place, especially if the glasses you have worn thus far have told you things like, I’m not safe, this is too much for me to handle, life is too hard, bad things always happen to me…

Before we start I want to introduce you to a key player in this post. This is my mom: isn’t she cute? All throughout my growing up years my Mom and Dad were in ministry. They still are, really, because I don’t know that ministry is something you ever really leave once God has called you to it, even if the platform changes. Here is the neat thing about them: even with all their experience, all their training, all their knowledge of Scripture, they realized a while back that in many areas they had lived their lives by a narrative that didn’t necessarily agree with the Bible. It agreed with religion, it agreed with church culture and their peers, but it didn’t agree with what they started to see very clearly in God’s Word. After all that time and experience and knowledge, they decided to put new glasses on – glasses that agreed with God on health, prosperity (for those confused about this word it is simply having more than enough for whatever God calls you to do), and the overcoming life we can have in Christ. There is something really special about watching your parents change their own glasses, rewrite their narrative, and see the changes it brings to their lives. 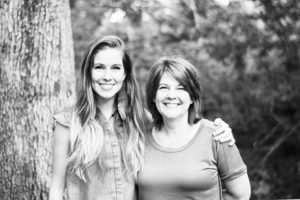 I wanted to share specifically today how my mom took off an old pair of glasses and put on a new pair and a brief peek at what it looked like. Even if these aren’t things you struggle with personally, I think it will encourage you and maybe paint a picture that things don’t have to always be the way they are right now.

As my mom proofread this to check for accuracy, she said it might encourage you if I include that before this defining moment in her life, she had been in a process of tearing down lies little by little and replacing them with truth. This process did not produce big, tangible change at the time, but it was slowly changing her heart and her beliefs. Don’t discount the seasons of uprooting old beliefs, taking thoughts captive, or anything else that seems tedious and like it isn’t really changing all that much right now. That is the exact place where change is conceived and starts to grow. It was the stacking up of these individual truths in my mom that finally led her to know that she could choose to act, right where she was – on the verge of a panic attack.

My mom had all home births and as her midwife was preparing her for one of my siblings to make their debut, she told my mom that during labor instead of “OW!”, say, “WOW!” Years later, when my mom was struggling with anxiety and panic attacks, she said the beginning of the end was when she realized she had a choice. She remembered what her midwife said and one day, when we were on a family vacation and descending into an underground cavern, she put it to practice. I didn’t know it at the time, but my mom was very claustrophobic and there was a sign at the entrance stating that if you struggled with claustrophobia, stay out of the cavern. Mom had a choice to make and she only saw one that would lead to freedom. Down we went.

I still remember that trip, mainly that Mom was over-the-top excited to be down there – or so I thought! She was talking excitedly all the way down into the cavern. “Wow! Look at that! Look how AMAAAAAZING that is!! Oh my goodness, guys, this is such an adventure!” She was very animated and it made for a fun trip that I remember to this day. It wasn’t until later that I learned she was putting into practice, “WOW instead of OW” and it was a defining moment for her. She realized she had the power to choose how to look at the situation and decided to speak it out loud.

I found out later that my mom didn’t just struggle with casual, uncomfortable claustrophobia. It was crushing. She couldn’t go into elevators or use a public restroom stall without one of us kids standing at the door with it cracked so she knew there was a way out. This was something she struggled with for years but as truth built up, she realized that it didn’t matter how long or intense it had been, there was a way out. She later said she realized, “It is not befitting to a child of God to live this way!”

As she was retelling me this story recently, she said, “With the same intensity you feel a symptom or a negative thought, that is the level of intensity you put into your WOW. If it’s a really strong negative feeling, give your WOW some oomph and say it like you mean it! That’s how you break the cycle.”

Some people might say that saying “Wow!” when what you really feel is “Ow!” is like telling a lie. They would argue that you should listen to your body and your feelings, dig deeper to find out the roots and the origin of them and take the appropriate steps to start a process of healing – and by all means, you can do that and it wouldn’t be wrong.

But Mom knows some things.

Choosing to say “Wow!” instead of “Ow!” isn’t a lie when you know what Jesus has done. It is not ignoring reality but simply agreeing that Truth trumps it and that God literally cannot forsake or fail you.

“Wow” is the barren woman singing before she has children; “Wow” is Paul and Silas rejoicing, even before they were supernaturally released from prison; “Wow” is seeing what God has said with your spiritual eyes even if your physical eyes don’t see it yet (spiritual eyes can so SO MUCH MORE than the ones we look at this world through).

“Wow” is standing in agreement with what God has done instead of relying on symptoms, thoughts, or feelings to tell us what is true. “Wow” puts the focus on God instead of the mountain and sees a promise that is bigger than the problem. Instead of looking at the mountain in front of you as insurmountable, “Wow!” is saying, “God, You get to show up and be God to me! I can’t wait to see how you do it! It’s going to be SO GOOD!”

“Wow” is throwing fear back in the devil’s face because what he meant to lure you into bondage, you turned into worship.

“Wow” comes at a problem, a fear, a symptom from the perspective of Grace and trust in God’s goodness and faithfulness to His promises. “Ow” is spurred on by fear and what feels true.

One of the things I especially like about my mom’s story is her use of words to speak something different than what she felt. Perspective is chosen inside and that was the start, but words declare it to the world, to our circumstances, and to our own heart. Words are powerful. Only speak the ones you want to see in your life because they are empty vessels demanding to be filled with something.

I mentioned in the last post how important I think it is to surround yourself with people who are where you want to be. They show you what’s possible and if they understand Grace, they will make it even seem simple and like an absolute sure thing if you stay focused on what is true.

The next time you find yourself feeling frustrated, angry, or hopeless, take a step back and ask if you can look at this differently. You will probably see an opportunity to change your “ow!” into a “wow!” Literally, say it out loud.

And if you don’t see the opportunity, ask someone you trust, who you feel is full of joy and confidence and has overcome what you want to overcome, to share a different perspective with you. Sometimes we need a little outside help to recognize there is more to life than what we see at any given moment.

No matter what your default has been in the past, you always have the power to put on a fresh pair of glasses. I know the doing is the hard part, but the choice is always there, and there is breakthrough in the doing. You are never alone. There is Grace to meet you every step of the way.

There is actually some really cool science that explains what happens in the brain when you get its attention with an exclamatory statement like, “Wow!” and then proceed to feed it a different narrative than its used to running on, but because this post is already a pretty good length, I’ll save that for another time. On this journey of learning to change perspective (and therefore, choose life) and realizing that I can rewrite my narrative, this is what I believe is the most important thing:

Because God is a good God who gives only good; because He gave all that Heaven had to defeat sin, sickness, poverty, and bondage for you; because He always brings abundance, freedom, and peace; because He has empowered you through His Spirit to live the life Jesus died to give you, whether you feel powerful or not; because the battle is over now, Jesus won it for you, and handed the victory over to you; because He is always the same, always faithful, always there to catch you and carry you through; because He has loved you with an everlasting love and His love always offers a choice:

You can always choose “Wow!”